Skip to content
Cart
Free Shipping On All US Orders $50+

BY VIOLET JOHNSON Published on the Guardian 01 SEPTEMBER 2019

Nigerian rapper Chibuzor Nelson Azubuike, popularly called Phyno is among the few most consistent rappers in the country even though, somehow, he still is underappreciated.

Last November, Phyno revealed that he will be releasing his third album sometime this year. With two solid albums under his belt, The Playmaker and No Guts No Glory, Phyno’s upcoming third body of work has made us highly anticipate its release.

In order to ease the tension of anticipation, the gifted rapper announced in August the release date of the forthcoming album, which he has titled Deal With It.

However, Phyno has already released two official singles, “Agu” and “The Bag” this year— both solid tracks that rely on his effortless flow. Our guess is that these commendable tracks will pop up on the forthcoming tape, alongside some more good music.

From what we see on the tracklist unveiled some days back, we expect a perfect blend of a variety of genres.
Have a look at the tracklist below; 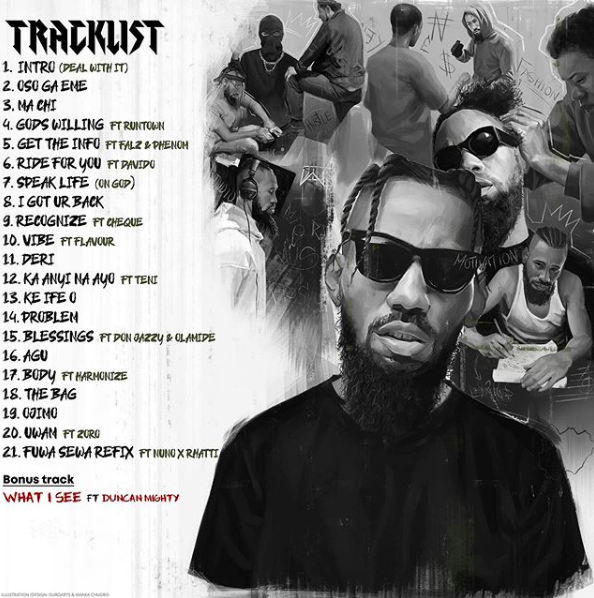 Off Deal With It, Phyno has released one of the singles on the album titled What I See which he teams up with Port Harcourt’s first son, Duncan Mighty.

Though he started out as a producer, producing for artistes like Flavour, Timaya, Ruggedman, Bracket, 2Shotz, J Martins and Mr Raw, gave a shot at the hip-hop genre in 2010 g after moving to Lagos.

Most of the songs on the album were recorded in Igbo and Pidgin. Ghost Mode, which was released in September 2012, and featuring Olamide, served as the album’s lead single and topped numerous charts around the country.

Back to News
Orders will be processed in USD.